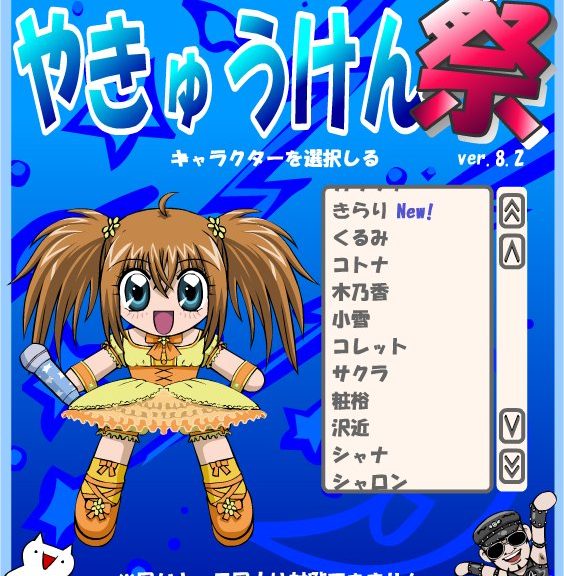 A highly extensive yakyuken game made in Flash. Containing over 100 characters at the latest edition spanning many anime, games, Japanese celebrities, and even internet memes, this game will probably keep the strip game fan busy for hours. To play, you must first select your character from the menu and click their SD picture, then select who you wish to play against and repeat. Every character has a unique introduction for their first strip scene and indeed, some characters are wearing more clothes than others, making them easier to strip or for a more challenging experience, playing as them against a more clothed opponent. Animation is mostly image sliding and eyeblinks, and clothes disappear in flashes of white, but the artwork of the characters is well done.

These screenshots were taken from an older version of the game. Sadly, the creator of this game and all of his games have vanished from the Web with the death of Flash. An outdated version of this game is available on DLsite, though a more complete version is floating somewhere out there, we’re certain. Follow this link for the official release.

Puff-puff won’t get you out of this one, Jess…