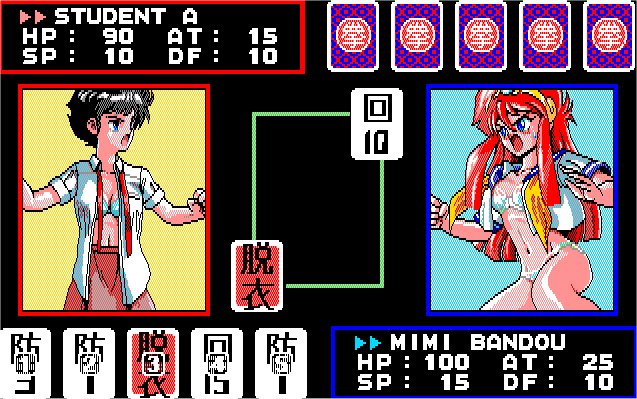 You play a boy who becomes the tutor to a new girl in class who wears a strange crown on her head. Things seem to be going just fine until you run into three busty, scantily-clad women on the street. They then introduce you to the game’s card battle system, where you must help the new girl fight. Unlike most strip games, the point of the battles isn’t to beat your opponent’s clothes off, but to reduce their HP to zero to defeat them, or their SP to 100 which seems to make the girl get embarrassed and cede the match. You gain power and lose defense (which can be restored by certain cards) by playing certain cards to get your girl to take off a piece of clothing, which will also raise your SP by a little. This game was re-released for the PC98 series, X68000, and MSX with slightly different names (Super Battle Skin Panic, Battle Skin Panic 9821, Mighty Battle Skin Panic) and with different, improved graphics. Aside from the names and graphics, however, there really isn’t much difference between the games.

Screenshots from the PC-88 version